One of the common beginner questions when starting train modeling is their scale. Scales are essential things to know if you want to start modeling, whether for trains, cars, trucks, and more. One of the most popular scale model trains is the HO scale trains which comprise about 60-70% of the model trains in the market. Thus, many questions revolve around this topic.

HO scale trains, also known as Half O scale trains, are train models in the 1:87 scale. HO is the most popular scale, with around 60-70% of model trains sold worldwide having this scale. The HO scale is also perfect for beginners since its parts are widely available and cheaper than other scale models.

This post will talk about the HO scale trains. What is their usual size? What is their gauge? What are the common questions regarding the HO scale and a comparison with other popular train scales? After reading this post, you will have a basic understanding of HO, the recommended layout size to start, and more.

What scale is HO scale trains?

HO scale trains are trains having a 1:87 scale. This means that you need to stack up to 87 of these models to have the same length as the actual train. HO scale is also one of the cheapest scales to start with since they are widely available and have numerous brand options.

When you see train models, 60-70% of the time, you will see HO scale trains. This is because it is currently the most popular train scale.

Model train manufacturers tend to follow this trend since they have standards to follow. These standards are set by the National Model Railroading Standards or NMRA.

Furthermore, manufacturers prefer making models at this scale since many modelers already have HO scale decorations of this size, making their products easier to sell.

Because of the popularity of the HO scale trains, their market is also very competitive, which leads to lower prices compared to other scale trains such as the OO, Z, N, O, TT, and S Scale.

Recommended Read: For a full guide on the other train scales such as the OO, Z, N, O, T, TT, G, S, and F scales. Feel free to check this post: Different Train Model Scales with Table Summary

So, what is the HO scale? HO scale is 1:87 scale. This means the size of the model is 1/87th of the actual model. So, in short, you have to stack 87 of these models to equal the length of the actual train.

When starting your build, you might wonder how big is this HO scale? What is the recommended size of my tracks for this type of scale? That’s what we will talk about in the next section.

What is HO scale equal to?

In short, if a 1-foot actual train is converted to an HO scale, it will be about 0.14 inches in size.

Take Note: You won’t find an actual train that’s 1 foot in size. I would just like to emphasize what the HO or 1:87 scale is.

I made a table below about the general characteristics of an HO scale model train.

If some of these seem confusing, don’t worry because I will now explain what it means below.

If we half the O scale, we get the HO scale.

The higher the number scale, the smaller the model is.

A common question I get is that if HO is half O, why is it not 1:96? The answer is that the 1:87 scale became a standard because it is what the National Model Railroading Association (NMRA) specified.

So, when starting your model train build, you might wonder what the recommended size of your layout is?

In fact, you could start with that.

However, the recommended oval track size for the HO scale train is about 4 x 8 ft wide.

Many wonder why 4 x 8 ft is the best start, and they wonder because 4 x 8 ft seems so large.

However, take note that trains don’t usually have tight curves. In fact, for an HO scale train, you should have at least a 22° curve so that the train runs smoothly.

Going lower than 22° is still viable; however, it won’t be realistic since the train can look like it’s derailing when on curves.

Some beginner tracks tend to give curves lower than 22°, which are still viable but not recommended.

Also, there are gauges to take note of.

Please note that while some modelers interchange gauge and scale, they aren’t the same.

When someone says to you, it’s HO gauge. It means HO scale.

However, the HO scale can have multiple gauges, such as standard gauge and narrow gauge.

This is important because tracks that have different gauges aren’t compatible with each other. For example, you can’t connect a narrow-gauge track to a standard gauge track and vice versa.

Furthermore, the wheels used in the standard gauge aren’t the same as those used in narrow gauges.

For a beginner, I suggest using the standard gauge since they are more widely available compared to narrow gauges.

Furthermore, narrow-gauge tends to have many types, such as HOn30 and HOn3.

But what do these codes mean? Let me introduce them a bit so you’ll have an idea of what they are.

So, here is a summary of the common gauge you’ll find in the model train store.

Let’s now use the table above to explain what a gauge is.

A standard HO gauge will have a rail width of 0.65 inches. This is relative to the actual size of the standard rail, which is 4 ft 8.5 in.

However, not all rails have the standard rail size. Some rails are narrower, which is why there are narrow gauges.

For example, if we talk about HOn3, it is a narrow-gauge for a 3 ft wide actual rail.

In short, a train can both be the same scale but of different gauges in which they aren’t compatible.

That’s why a beginner should opt for a standard gauge.

They should also make sure that the tracks they’re buying are for the standard gauge because that means they can add more tracks of the same gauge in the future.

In the next section, I will answer some of the common questions about the HO scale.

I made a post about adventure force, where they provide 1/64 model cars that can be used if you want an S scale model track. You can find the post here: What is Adventure Force?

However, due to their rarity, they are generally more expensive than HO scale trains. Thus, I always recommend the HO scale for beginners.

Is HO scale the same as OO?

Please note that the OO scale is also different from the O scale.

Here is the difference between HO, OO, and O scales.

While the size of an OO scale is close to an HO scale, they have a different scale. Furthermore, OO is a scale model popular in the UK, not the USA.

Is N Scale the same as HO?

If you see a smaller HO train set, there is a high chance it is an N scale model train. The N scale is the 2nd most popular scale, with 20% of the model trains sold on this scale.

N scale is popular for train modelers that prefer to save space since the N scale is way smaller than HO and only recommends a 2 x 4 ft oval layout.

Soon, I am going to make a post comparing the N scale to HO since they are two of the most popular scale. Stay tuned! 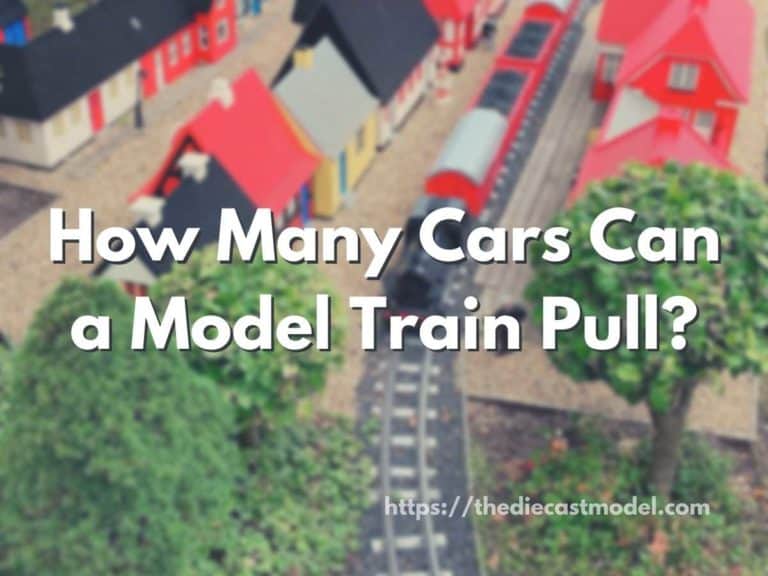 Model trains are a great hobby to learn basic repair and electronics while having fun, but many people are unaware of how many cars a model train can pull. This is a must-know for modelers as excess loads can strain the motor, damaging the train. But, generally speaking, how many cars can a model train…